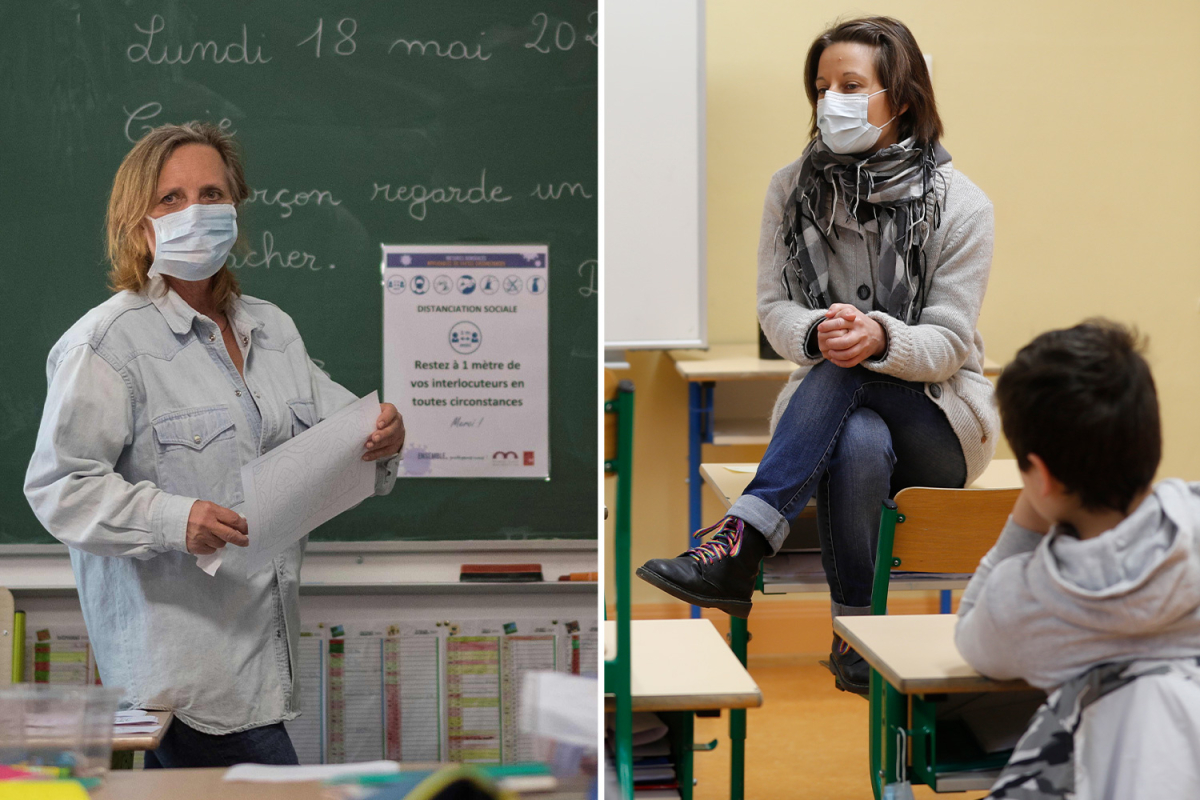 TEACHERS and students have returned safely to classrooms in France – making fun of UK unions trying to block the reopening of schools here.

Additional protective measures against coronaviruses, such as masks and one-way corridors, have been attributed to the success of the back-to-school policy across the Channel.

Ministers said there had been only 70 cases of the coronavirus in 40,000 schools and nurseries in the past 11 days and that no children or staff were seriously ill.

Emmanuel Macron’s government agreed to reopen classrooms after French militant union barons warned that children should not be the “collateral victims” of the Covide-19 pandemic.

By contrast, UK teachers’ unions are locked in a furious row with the government over plans to allow certain year groups to return on June 1.

Unions have ordered members not to engage in the plans, and hit schools with 22 pages of demands that must be met, including a tagging ban.

Scientists say the risk of the virus is low, and children will be harmed more by missing critical developmental milestones.

UK ministers and officials will study success in European countries where schools have reopened such as Germany, Belgium, Austria and Denmark.

In France, around a quarter of children have returned to class if they live in areas where transmission rates are lower.

Elementary schools reopened on May 11 and colleges reopened yesterday, with social distancing measures aimed at reducing the risk.

All children over 11 must wear masks, and classes are limited to 15, with one child per desk.

Jean-Michel Blanquer, French Minister of Education, said there had been 70 cases of coronavirus in around 50 schools since it reopened.

Seventy schools have been closed to end other infections, including seven in the city of Roubaix, in the north of the country, where only one boy was infected.

The minister said it was believed all infected children caught the virus outside of school, but they were shut down as a precaution.

“It shows that our measures are as strict as we said they would be,” he said.

The UK government wants nurseries and primary schools to start reopening from June 1, starting with intake, first and sixth graders.

Former Prime Minister Tony Blair backed the plan last night, saying some children were getting « no education at all ».

He told the BBC Newsnight: “I don’t think they would say they put the openness of the school above the health risks. What they do is base it on the evidence, actually.

“There are countries that have reopened parts, at least, of their school system.

“If you look at all the best evidence, especially for young children, the risks of transmission are actually quite low. «

SCIENTIFIC SUPPORT FOR THE RETURN TO SCHOOL

Nothing in life can be called “risky years” – but is there any evidence that returning to school is safe for children and teachers?

Dr Soumya Swaminathan, chief scientist of the World Health Organization, insisted: “There have been no big outbreaks in schools. «

She added that « children are less able to spread » the virus.

A test in Iceland found that none of the 848 under 10 had tested positive.

Professor Sir David Spiegelhalter of the University of Cambridge has calculated that the risk of children dying is one in 5.3 million.

There have been conflicting scientific claims on whether children can be major spreaders of the virus.

A recent German study of nearly 4,000 coronavirus patients found that « children can be as infectious as adults. » He advised against the “unlimited reopening of schools”.

An Australian study found that nine staff members with the coronavirus had come into contact with 735 students. But none had contracted it from the children.

A nine-year-old Briton infected in France did not transmit it despite having been in contact with more than 170 people.

Initial research in Denmark and Norway shows that reopening schools has not triggered a peak in the disease.

British scientists Dr Alasdair Munro and Prof Saul Faust have found that children do not appear to be super-spreaders. They concluded: “Governments around the world should allow all children to go back to school. «

UCL professor Russell Viner backed them, but with guarantees.

He said: “About 150 children die in car crashes in Britain every year. But parents don’t say, “Never take the car”. They buy child seats and wear seat belts.

Statistics, of course, do not highlight the pain and loss felt by every bereaved family.

Yet current science seems overwhelming to signal that it is time for primary classes to return.

And the plans received a boost from further evidence suggesting that reopening schools in 22 countries has not been detrimental to children and teachers.

“What has been stressed very strongly is that these schools have very supervised conditions. «

Alan Smithers, professor of education at the University of Buckingham, said: “The unions demanded proof, and that’s it.

“They should therefore start to cooperate fully with the government so that our schools can reopen as quickly as possible. «

Government scientists insist it is safe for schools to reopen in two weeks.

Calling for “prospect,” Deputy Chief Medical Officer Jenny Harries said only two or three in 1,000 people are currently infected and that number is dropping.

She said students will be treated as « family groups » in grades 15 to prevent any spread of infections, meaning there was no need for PPE.

Each « bubble » will not be able to mix with other children in the school.

She added, “The teachers are brilliant, and I know that as a parent they are often much more productive than I am trying to get my kids to wash their hands and practice good hygiene. «

Schools have issued advice on how to make classrooms and playgrounds as safe as possible, including keeping offices further away.

The school leaders’ union, ASCL, said the primaries should open after assurances from scientists.

But die-hard teachers’ unions have claimed it is « not safe » for teachers to mark children’s books in case they catch Covide-19.

Almost half a million teachers have been asked to refuse even to talk about back to school by the boss of the UK’s largest teachers’ union the NEU.

They are demanding that teachers be allowed to wear masks and PPE – even though Public Health England says this would generally not be necessary.

The Sun understands that schools in parts of England may be allowed to delay reopening, but only if coronavirus infection rates have increased locally.

Their 12-step document tells union representatives that they should not agree to schools reopening more fully if all demands are met.

And they warn that even if every concern is addressed, they still expect to oppose plans to gradually reopen schools from June 1.

The document states: “It seems extremely unlikely at this time that national circumstances allow it. «

Entire schools are expected to close if staffing levels drop, the document says.

Conservative MP Robert Halfon, chairman of the special education committee, said unions should be « also concerned about the risk for thousands of vulnerable children » of not being educated.

The Education Ministry said, “We want children to go back to school as soon as possible because being back with their teachers and friends is so important to their education and well-being. «

Parents have been warned that students who do not return to class cannot receive online lessons from teachers due to a potential staff shortage.

Cabinet Minister Michael Gove said last week the government was « confident that children and less will be safe » when they do return to classrooms.

« The clear scientific and clinical advice is that it is safe to see schools reopen, accompanied by social distancing, » he told the BBC’s Andrew Marr show.

We have now heard everything from the teachers’ unions.

You’d think they’d be more eager than anyone to stick with it due to science.

But when government experts or even the WHO contradict their desire to close schools, they ignore it.

Or they come out of the BMA – as if it represents medical opinion, rather than just another leftist union.

Their latest wheezing, which is part of an absurd case of 12 requests, is to refuse to mark homework in case members catch Covids from a book. The risk is tiny. . . zero, if they take precautions.

Most of the elementary school children the government wants to return on June 1 get minimal homework anyway. And, as Deputy Chief Medical Officer Jonathan Van-Tam says, they don’t get the disease severely and pass it on the way they do.

It is impossible to ensure that teachers will be 100% safe. 100 before they return — as is the case with any worker.

There will be a statistically minuscule threat as long as this disease persists. Life is full of it. It is quite another. Unions cannot ask for an exemption.

This prolonged stoppage is already causing immense damage to students, in particular the most disadvantaged.

The truth is, unions are capitalizing on an essentially middle class reluctance to return to work because many have lost the perspective of the real risk.

In all fairness, this reflects the success of the government’s “stay at home” campaign.

But now deaths and infections are steadily declining and the economy is in dire straits, we need to shift gears.

The release of daily Covide collections figures will help. Notably because the total will be millions, as opposed to the death toll of 34,796. Terrible if that last figure is, there is still a small fraction of the whole.

The fact that we can now test everyone for symptoms, and have 21,000 contact tracers, should even drive those numbers down.

Teachers, meanwhile, should consider whether their unions have lost ground.